SACRAMENTO, CA | April 23, 2018 – Anpac Bio-Science Co., Ltd. (“Anpac Bio” hereafter), an international life science company with operations in both Asia and the US, announced today, that it recognized a 386% growth in insurance sector revenue in the first quarter of 2018 compared to 2017 for the same period. To date, Anpac Bio has nearly 10 major insurance as its customers, some of which are among the largest insurers in the world.

The core to Anpac Bio’s insurance reimbursement strategy is to demonstrate its significantly reduced costs over existing screening methods of early-stage cancer screening. The Company’s cancer differentiation analysis (CDA) screens can screen up to 26 cancer types simultaneously compared to only a single cancer type with traditional screening methods. Also, CDA is able to provide the maximum coverage at a minimum cost to carriers and individuals. Detecting cancers at the earliest stages offer the best chance for recovery and avoid extended, and costly, hospital stays.

Dr. Chris Yu, CEO of Anpac Bio, commented, “Anpac Bio continues to demonstrate sustainability in the marketplace in its partnerships with major insurance carriers that are built on an annual recurring revenue model. With the positive validation and surge in revenue we are receiving in Asia and a high level of interest from major medical institutions and healthcare providers in the United States, we continue to lead out with a significant advantage in cancer screening technology over the competition.”

Additionally, Anpac Bio offers its CDA technology directly to employers and is currently working with 14 global Fortune 500 companies as well as with national supplemental insurance carriers. By working through multiple channels, Anpac Bio believes it can be a commercial leader in the cancer diagnostic space. 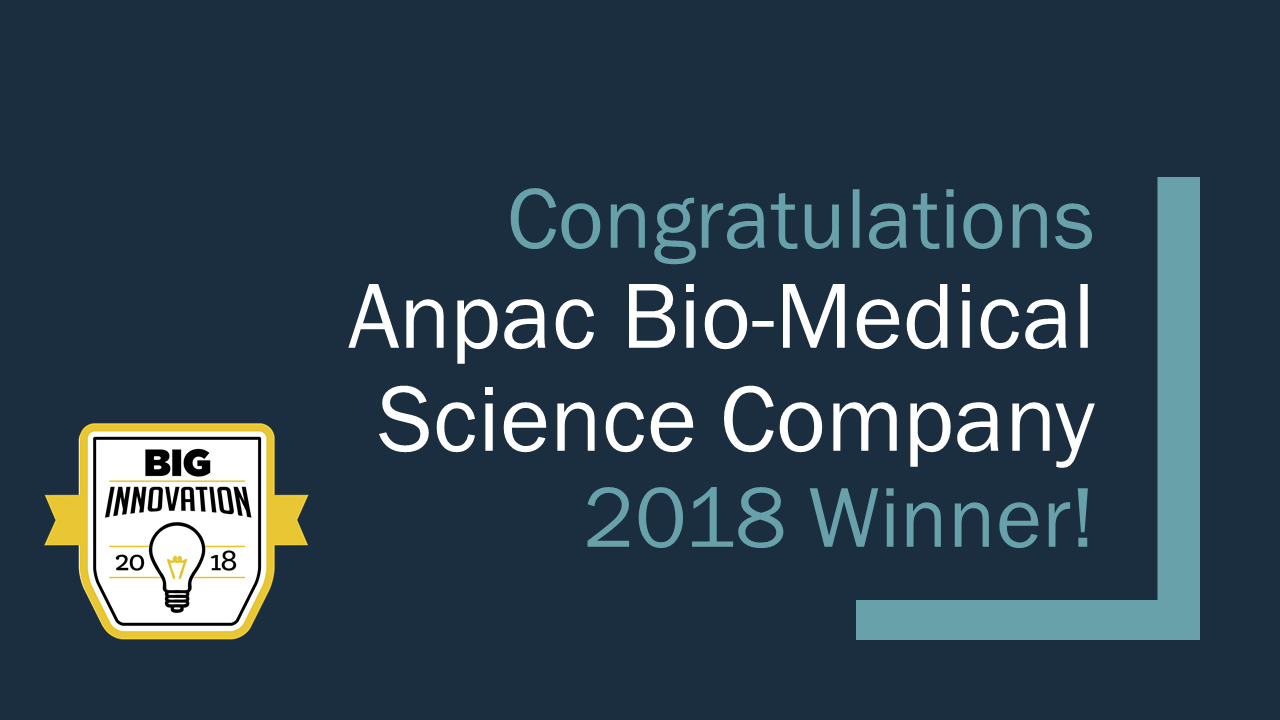 Recognizing the entire corporation for executing significant and consistent innovation through its worldwide research and services, Anpac Bio was particularly recognized as an international, “Big Innovation Award” winner due to its breakthrough and rapidly expanding, “Cancer Differentiation Analysis” (CDA) liquid biopsy technology.

“We are very proud that Anpac Bio is a 2018 ‘Big Innovation Award’ winner,” states Yu. “Our corporate culture at Anpac Bio encourages constant questioning and testing of the status quo. For dozens of years, the medical and research communities have applied the same, often toxic and ineffective methods to treat cancer. We invented CDA to challenge the status quo thinking of only treating cancer. CDA allows doctors and patients an innovative solution to beating cancer by catching the disease at its earliest stages. If cancer is caught early, the patient has the most, effective treatment options, and the best chance to beat the disease and live healthy lives. We are honored to receive the ‘Big Innovation Award’ recognizing our company and technology for being novel, positive, and disruptive in worldwide fight against cancer.”

“This year’s winners show the diversity of innovation and its impact on the economy, our cultures and the world as a whole,” said Maria Jimenez, chief operating officer of the Business Intelligence Group. “We are thrilled to be honoring  Anpac Bio as they are leading by example and making real progress on improving the daily lives of so many.”

The Business Intelligence Group was founded with the mission of recognizing true talent and superior performance in the business world. Unlike other industry award programs , these programs are judged by business executives having experience and knowledge. The organization’s proprietary and unique scoring system selectively measures performance across multiple business domains and then rewards those companies whose achievements stand above those of their peers.

Invited by the acclaimed, celebrity business empire CEO to appear in a special, “Breakthroughs in Medical Innovation” segment of “Worldwide Business with Kathy Ireland”, Dr. Yu shared with Kathy and her audiences information about Anpac Bio’s proprietary “Cancer Differentiation Analysis” (CDA) liquid biopsy technology – the only such technology and testing fully-commercialized and available for patient screening worldwide.

Ireland featured Anpac Bio exclusively on “Worldwide Business” due to the company’s comprehensive research validity data from 80,000+ cases processed to date, demonstrating CDA diagnostics consistently detects over 26+ cancers — with a sensitivity and specificity rate range of 75%-90% — usually identifying the disease at its earliest stages from a single, standard blood test. And it does so without any harmful side effects in patients; generating far fewer “false positives” at a cost substantially lower than traditional testing; and generating results within minutes of sample submission.

Kathy Ireland is the CEO of Kathy Ireland Worldwide. kiWW® is listed as one of the most powerful brands in the world by License Global Magazine. Kathy Ireland was named one of the 19 most influential women in licensing by License Global magazine and Fairchild Publications. Kathy graced the cover of Forbes Magazine twice (2012, 2016). kiWW® earns over $2.5 billion dollars in global retail sales annually; and has received multiple awards, including “Good Housekeeping  Seals”. Kathy and kiWW® support many cancer-related charities such as the St. Jude Children’s Research Hospital. UCLA named Kathy one of the, “Top Ten Women’s Health Advocates in America” today.

Anpac Bio now has one of the leading patent portfolios of cancer diagnostic companies globally. The company’s intellectual property is key to its current business and future international commercial expansion.

To date, patents have been issued in a number of countries and regions globally, including: China, Japan, the United States, Korea, Australia, New Zealand, Israel, South Africa, Taiwan Area, and in Europe.

Anpac Bio is also on track to have over 200,000 individual/cases served in 2018 and continues to enjoy rapidly growing commercial relationships with global Fortune 500 companies, insurers and manufacturers in Asia, as well as leading research institutions in the United States. Anpac Bio is screening out cancer signals far earlier and more effectively than any competitors. It continues to lead the sector in innovation and providing potentially life-saving detection and screening processes on thousands of individuals weekly.